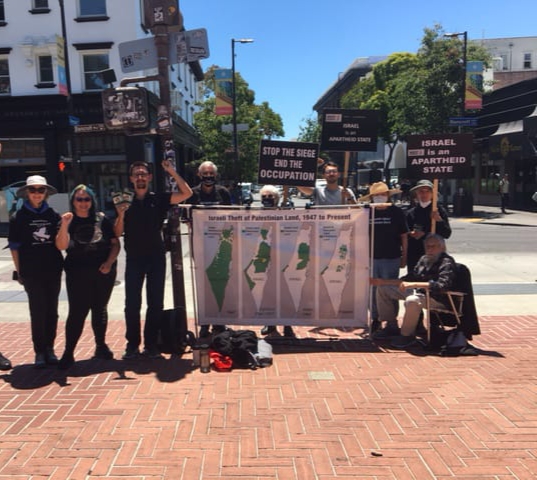 A group of activists with the name “Women in Black” held a solidarity event with Palestine on the University of California, Berkeley campus on Friday, July 22nd. The group has been holding these events regularly for over 25 years every Friday. This time, militants from Friends of Palestine against Imperialism and Zionism also joined the effort. During the action, information cards exposing the racist nature of Zionism and the Israeli state were distributed to the students on campus, and a sign showing the systematic invasion of historic Palestinian land by Israel was upheld.

The information cards contained factual data and slogans on various topics, from children murdered and imprisoned by the Israeli state to the US financial and military support to Zionism. Slogans that expose the link between Zionism and imperialism, such as “Israel is an Apartheid State”, “US Money and Support Empower Israel to Continue to Impoverish Palestinians and Steal More of Their Lands”, and “Stop Funding of Israeli Oppression of Palestinian Children” were raised through these information cards.

College students showed great interest in the event, and often expressed solidarity with Palestine. Although Zionists attempted to provoke a conflict by setting up their table right next to the sign, the sheer number of pro-Palestinian activists and the help our comrades from Friends of Palestine prevented anything that stood in the way of success.