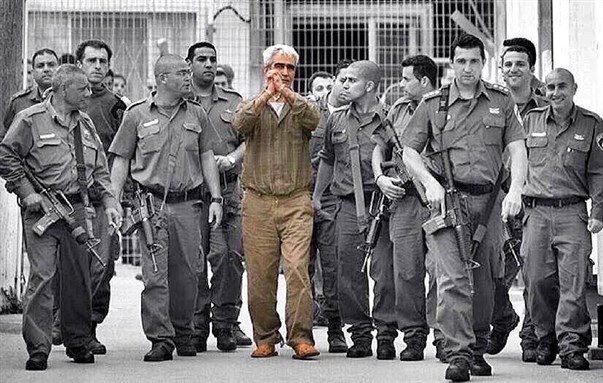 The Friends of Palestine Against Imperialism and Zionism Movement demands that Ahmad Sa’adat and his fellow 4500 Palestinians be released/freed from Israeli prisons. This illegitimate state’s captives include 160 children and some 450 Palestinians who have never faced any charges or trials, held under a Zionist practice called the “administrative detention,” which is obviously contradictory to even the internationally accepted basic principles of law.

Sa’adat, the General Secretary of the Popular Front for the Liberation of Palestine (PFLP), is sentenced to 30 years by the Zionist occupiers on 25 December 2008, after being violently abducted from the Palestinian Authority’s Jericho prison in 2006, where he had been held under U.S. and British guard.

What a historical moment that marvellously draws a bold line between the oppressors and the oppressed! The imperialists, Zionists and their puppet regime on the one side, the Palestinian communist resistance on the other.

Comrade Sa’adat fought against capitalism, racism, apartheid and colonization, as a member of his organization. Although his captivity is an outrage for all Palestinians, today, his comrades are carrying the flag of emancipation restlessly. The Zionist losers are clearly aware of the fact that they must imprison every single Palestinian in order to stop the glorious struggle of Palestinians.

Today, we join the call of Samidoun Palestinian Prisoner Solidarity Network and once again call for Sa’adat’s immediate release from the Zionist prisons, as did we many times before. We also do stress a sine qua non of a real friendship with the Palestinian people and a real support to the Palestinian captives: An effective boycott of the Zionist entity, including a full ban on trade with Israel and an immediate end to all military & intelligence relations with it. A sine qua non that Turkish governments never fulfil!

Fight Zionism and imperialism, for the freedom of Sa’adat and other Palestinian captives!

Fight the reactionary Arab regimes, for the will of all peoples of the region to become the reality!

Fight for a free, democratic, secular and socialist Palestine from the river to the sea!