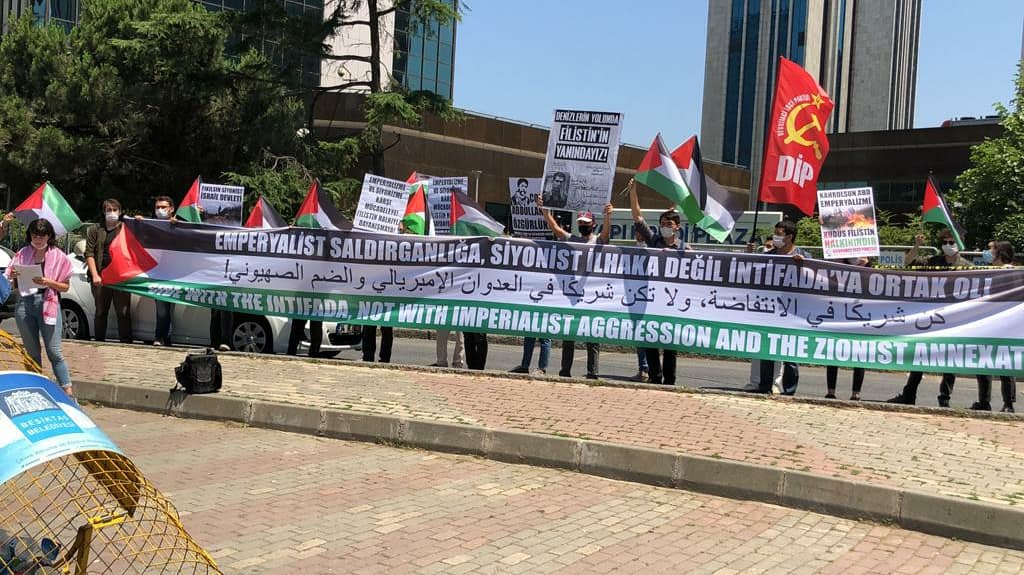 We held a demonstration in front of the so-called Israeli Consulate in Levent, Istanbul, in order to protest the Israel’s U.S-backed plan to annex up to 30% of the West Bank. We marched from the Levent underground station to the consulate building with slogans and a long banner saying “side with the intifada, not with imperialist aggression and the Zionist annexation!”.

We also carried placards both demanding immediate release of Georges Abdallah, a Lebanese communist imprisoned in France who called for solidarity with the Palestinian people, and featuring the Al Fatah-issued Palestinian identity card of a Turkish revolutionary, Deniz Gezmiş, who had fought against Israeli army.

Approaching towards the Consulate building, we appealed to the people for supporting the Palestinian cause. The during-march propaganda exposing the crimes committed by Zionism and the U.S imperialism, and the collaborationist politics of the AKP drew attention from the people around.

It was seen that the Consulate, which was conscious that the annexation plan would be a cardinal crime perpetrated by Israel against the Palestinian people and all oppressed nations, had requested the Istanbul police to take large security measures such as security lines, riot police and water cannons.

We exposed the hypocrisy of the AKP government, which, on the one hand, has feigned opposition against Zionist aggression and, on the other hand, has dropped the Mavi Marmara case alongside strengthening its trade relationship with Israel and negotiating with Israel on the Palestinian gas fields.

We demanded the expulsion Israeli ambassador, and all commercial, military and political relations be severed. We called academics, sportspersons, artists and the relevant organizations to support the boycott movement and to cut off all their ties with Israel.

We reiterated our call for rejecting all sponsorships offered by ARTISRAEL, an organization that has played an important role in whitewashing the crimes of Israel. We also called on the Göztepe Football Club of Izmir to terminate its contract with Puma, which has sponsored Zionism.

See below for the text of the press release read out by our spokesperson Naz Şakar:

Dear reporters, and friends of Palestine,

We have asserted persistently since the first day of our campaign that the Zionist Israeli state should be destroyed.

We have also emphasized that the plan of a “two-state solution” should be rejected.

Zionists having been emboldened by Trump’s “deal of the century” now make preparations to announce that they are annexing some parts of the Jordan River Valley and of the West Bank that they had failed to usurp in 1948 and 1967.

We declare in our manifesto that Israel is a cancerous cell that should be prevented from spreading, that is, it should be torn down!

Therefore, as having been seen in the Madrid Conference in 1991 and Oslo negotiations in 1993, “diplomacy” is not a proper means to deal with that racist and aggressive state. Palestinian people have nothing left to negotiate. The only way to deal with the Zionist entity is to wage an all-out fight against it.

Dear reporters, and friends of Palestine,

The AKP government, on the one hand, has pretended to be anti-Zionist and, on the other hand, has dropped the Mavi Marmara case alongside strengthening its trade, military, diplomatic and intelligence relations with Israel and negotiating with Israel on the Palestinian gas fields.

As that illegitimate entity occupies the Palestinian territory, art organizations do not hesitate to receive funds from the ARTISRAEL.

We are sure that they will soon begin to negotiate on the pipelines!

Today what those who are true friends of Palestine should do against prospective annexations is to end all their relationships with that illegitimate entity.

We, as Friends of Palestine against Imperialism and Zionism, will do whatever is required to stop the Zionist aggression.

We will turn their dreams into nightmares.

We will stand firmly against the Zionist expansionism.

We will support the Palestinian cause and fight against imperialism and Zionism until the day a free, secular and socialist Palestine is established!

Long live the Palestinian cause!

Down with the Zionist Israeli State!

Friends of Palestine against Imperialism and Zionism