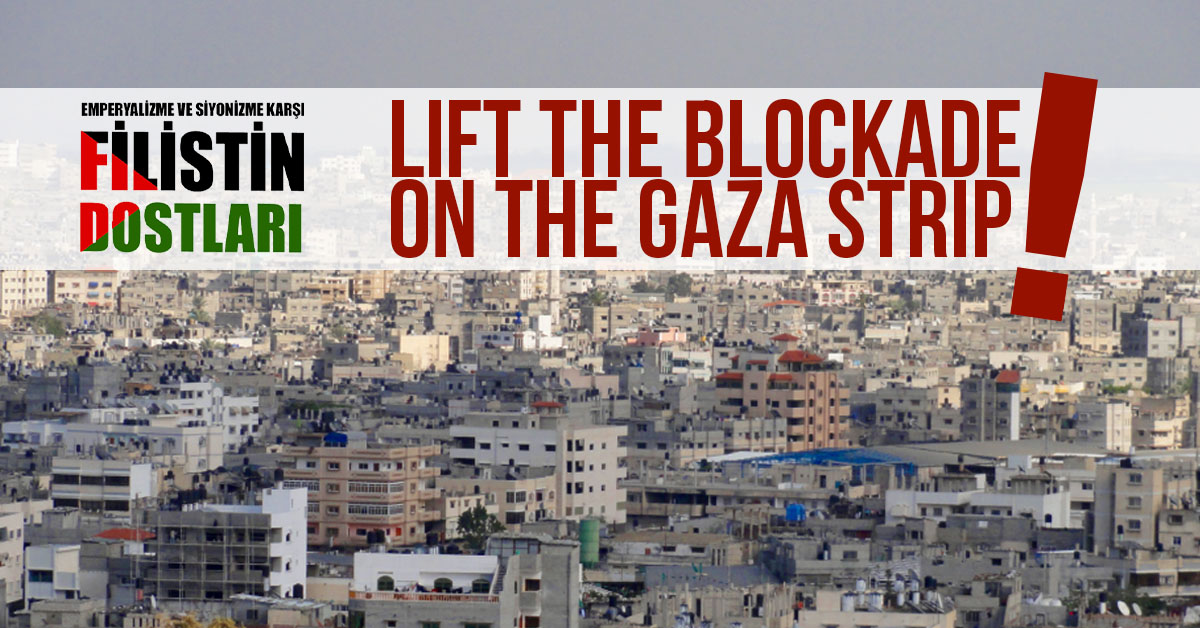 The new-type coronavirus epidemic plaguing the world has now arrived in the Palestinian territory via two persons who entered the Gaza Strip through the Rafah border crossing with Egypt, according to the statement released by the Palestinian Ministry of Health. What jeopardizes the lives of people in the Gaza Strip is, however, not only the spread of the virus, but also the Zionist blockade on the City which under the current circumstances will cause a horrendous catastrophe!

The City which has for years been suffering a suffocating blockade imposed by Israel with the help of Egypt faces great difficulties even in providing its people with potable clean water, let alone the products needed for personal hygiene. The blockade also causes the Palestinianpeople not to decent access to the health services. For example, medicines are confiscated at the borders or cancer-diagnosed patients are not allowed to leave the City for receiving treatment somewhere else. The Gaza Strip is also deprived by Israel of medical facilities and equipments that are required to cope with the epidemic. It has only 40 intensive care beds, 56 respiratory devices and 200 test kits for a two-million population!

It is clear that the blockade on the Gaza Strip which is now intertwined with the coronavirus epidemic cannot be understood properly without considering how unwilling both states and capitalists are to finance and enhance antiviral measures. As people around the world still diedue to inadequate number of respiratory devices, two million Palestinians who have lived in an open-air prison for 13 years now suffer being deprived both of respiratory devices and even of basic medical tools, and are left to mercy of the Zionist Israel!

There is only one way to avert the imminent calamity: lifting the blockade on the Gaza Strip!An international campaign should be organized immediately to force the Zionist Israel to do so. The City would otherwise turn into a mass grave. The former is undoubtedly something desirable for Israel. Both the blockade itself and Israel’s atrocious attack with live ammunition against the unarmed people who joined the “Great Return March” already showed the true colors of Zionists. It is therefore unsurprising that nowadays they discusshow to repel Palestinians living in the Gaza Strip if they flock to the border to survive the viral epidemic, with a majority in favor of shooting them.

Hence it is an indispensable duty for all friends of Palestine to prevent the Zionist entity from committing such a mass decimation by leveraging the Covid-19. The way to force the Zionist Israel to lift the blockade is to sever diplomatic relations with that “state”. We, as the Friends of Palestine against Imperialism and Zionism, thus call on Turkish government to expel all Zionist diplomats; to unilaterally terminate all commercial relations; and to impose sanctions on any companies that have interest in the blockade. “Condemnations” released by theTurkish Ministry of Foreign Affairs on its website are futile attempts and nothing going beyond paying lip service to appease the public reactions. We warn in advance that shrinking from taking steps aforementioned above will mean being accomplice once again –alongside dropping the Mavi Marmara flotilla case for the sake of purchasing natural gas, and maintaining military and economic cooperation even during the Gaza Strip being shelled- in persecution of the Palestinian people!